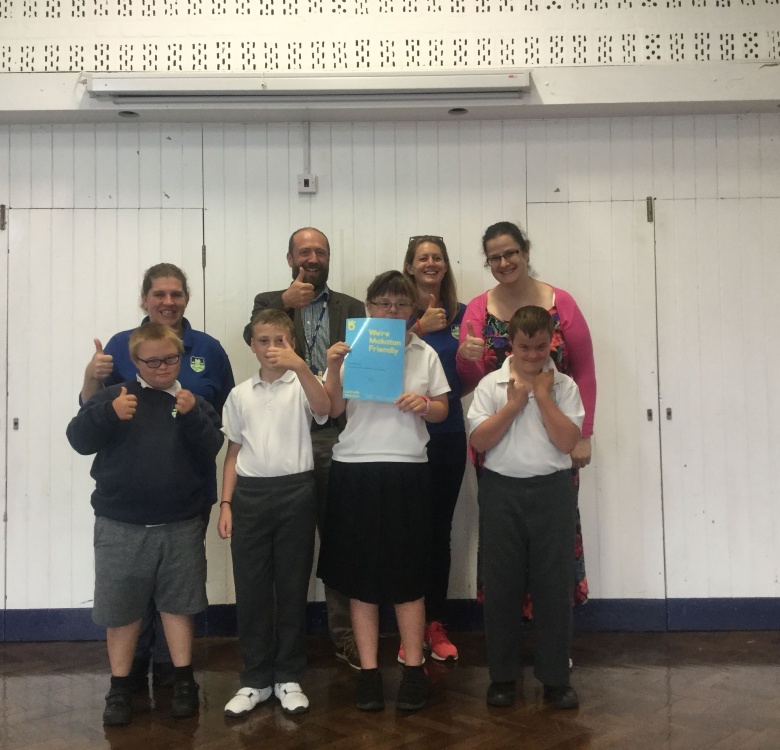 I am very pleased to be able to tell you that The Castle School has achieved Makaton Freindly Status in recognition of all the amazing work our staff and pupils do around communication.

We are extremely fortunate to have three qualified Regional Makaton Tutors at The Castle School. Holly Cannon-Taylor qualified in December 2016, Liz Wiltshire and Meaghan Ebbage-Taylor qualified in July 2017. The Castle school is also committed to funding staff training. This allows school staff to attend various Makaton training sessions. An Introduction to Makaton is aimed at new staff, while everyone has the opportunity to take part in the Makaton Foundation Workshop, followed by the Enhancement Workshop.
Over the recent years over 60 staff have completed the Foundation workshop, including teachers, teaching assistants, support assistants and supply staff.

As Meaghan is the school's Maths Co-ordinator, she has introduced maths signs and symbols across the school to support learning of all abilities. This enables all students of all levels to access the abstract mathematics curriculum, therefore setting them up to achieve.

Through staff training, along with the positive approach the school has towards Makaton, our non-verbal children and young people who are on the GINN programme, are encourage to sign the words. This way, we know they can read the word, and the speech usually follows in time. Staff across the school continuously work with children using Makaton to encourage speech and those who are ready, sentence structure.

The Castle School Choir have teamed up with other local primary schools to form a community choir. Together, we go into the community, where we sing and sign various songs during the school year. We have been to Supermarkets, Hospitals, and took part in Picnic in the Park. The staff and general public watch the signs and then begin to join in with singing and signing the songs, in particular the Christmas songs.

With Makaton’s approval, Holly taught the Beginners Workshop to some of our students at Post 16 in June 2017. Working along side our World of Work team, this enabled the pupils to have the Makaton skills and certificate of attendance added to their CV for employment opportunities. One of the pupils in particular, has introduced signs to her nursery work experience through Good morning routines and nursery rhymes/songs.

In addition, we offer Makaton sessions to outside organisations who we work along side, such as transport companies and Riding for the Disabled Association (RDA). A number of volunteers from RDA have completed an introduction to Makaton. We also have a couple of days where SCITT students join us for SEN training, they also take part in the introduction to Makaton. Some SCITT students have fed back they they found it useful for reinforcement in their mainstream placements.

Dominie Burton, and later Lesley Bungay supported Holly with her part 2 tutor training in December 2016. Lesley then went on to support Liz and Meaghan in June 2017. Both of these workshops included participants from various primary and pre-schools within our local and surrounding areas. We often receive enquiries from other schools regarding Makaton training.

Some testimonials from staff and pupils:

“Makaton is used consistently to support parents and pupils when delivering training events and any ELSA sessions respectively. A huge variety of our work consists of understanding emotions; it is incredibly powerful to have visuals to enable a consistent approach to be delivered – Makaton supports this invaluably.  Holly is always ready to help by supporting us to learn new language and deliver in the correct way. The ability to understand and subsequently express emotions felt by yourself and then in a group setting, in a socially acceptable manner, can be life changing – Makaton helps our students to achieve this and show empathy. Working in groups using Makaton gives all the chance to be heard and to generalise their skills.” – Jackie Hogg, Pastoral Manager.

“two pupils in may class wrote a poem for the schools harvest festival assembly. Because the assembly was for the whole school, the pupils signed the poem as they read it aloud, to enable all pupils to follow and understand the poem. One of the girls enjoyed teaching the signs she knew to her peer when practising the poem” – Hayley O’Donnell, class teacher.

“(Singing) helps Lauren (TA) know what I want to say. Lauren signs to me too” – Pupil K.

“I like signing in choir because I like to teach people the signs at school and my brother when I practice at home” – Pupil J.